Many coins have surface conditions that preclude numeric grading from NGC. Coins that have been improperly cleaned, are holed, have scratches or certain other issues cannot be assigned a numeric grade from 1 to 70. These coins, however, are eligible for NGC Details grading. 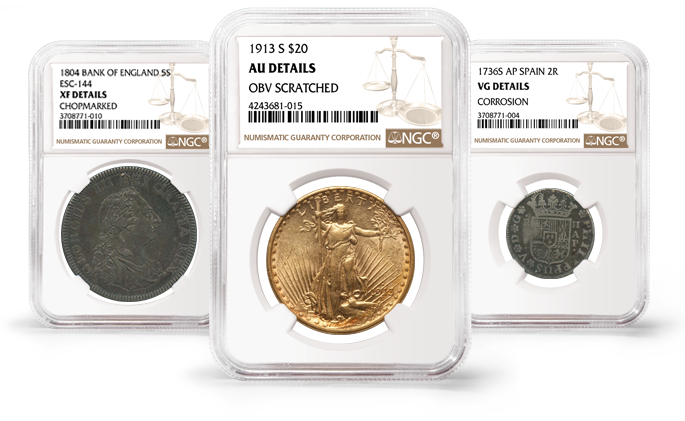 Conditions detrimental to coins are those involving unsuitable storage containers, extremes of heat and humidity, as well as atmospheric pollutants and saltwater. Sea-salvaged and treasure coins are often victims of environmental contamination that leave their surfaces in a state that makes them ineligible for numeric grading. This is true also of coins stored in highly reactive paper or plastic storage media. Read more...

BRONZE DISEASE is a term describing a form of corrosion unique to copper or bronze coins that typically affects ancient coins.

CORROSION is a problem for most metals, though gold and platinum are nearly immune to its effects. A natural chemical reaction, it causes the surfaces of a coin to form new molecular compounds. When corrosion is severe or unattractive, it results in coins certifiable only under Details Grading. NGC's graders may narrow down the problem area by using the terms OBV CORROSION, REV CORROSION and EDGE CORROSION.

ENVIRONMENTAL DAMAGE is the result of a hostile storage environment, where the exact cause of the surface damage is indeterminable.

STAINED coins display discoloration but not corrosion. More often than not such staining is irremovable. When isolated to one side, it is described as OBV STAINED or REV STAINED. 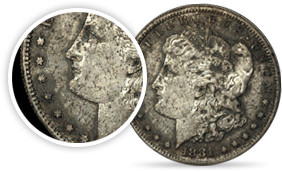 Among the most common reasons for a coin to receive Details Grading is unskilled and improper cleaning. The temptation to "improve" a coin's appearance by chemically or mechanically cleaning it seems acceptable, until the possible detrimental effects are later explained to the collector. Light, non-destructive cleaning, particularly when found on older coins, may still permit numeric grading. Harsher cleaning that is destructive to a coin's aesthetic appeal, however, will result in Details Grading only, and such cleaning is not correctable with conservation. Read more...

BRUSHED describes a coin that has been wiped with an abrasive brush. The affected areas may be narrowed down to OBV BRUSHED or REV BRUSHED.

BURNISHED is the term used when the cleaning is more aggressive and gives the coin a very brilliant but unnatural sheen. Sometimes this action is performed with some abrasive media such as ball bearings, or it may result from treatment within a rock tumbler.

IMPROPERLY CLEANED is a generic term to describe unskilled cleaning when the exact nature of the action is uncertain.

POLISHED is similar to BURNISHED, though it's typically applied when the abrasive action is less severe.

WHIZZED coins have been cleaned with a fast, rotary wire brush in order to simulate the effect of mint luster on a circulated coin. These are easily spotted by experts, as their lettering and other design details typically are distorted a bit by this action.

WIPED describes a coin that displays surface hairlines in one or more isolated areas. This is usually the result of accidental mishandling rather than intentional cleaning, but it still requires Details Grading. NGC's graders may specify OBV WIPED or REV WIPED to more accurately describe the condition. 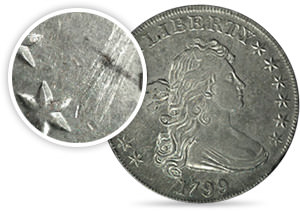 A coin that has been treated in some way that changes its color and general appearance cannot be graded numerically and is eligible for Details Grading only. Most color alterations are performed through the application of chemicals, fillers or heat. Read more...

ARTIFICIAL COLOR refers to bronze, copper and copper-nickel coins that have been chemically dipped or cleaned. Under natural conditions, most copper coins will darken over time, but examples that retain their original "red" color are highly valued. That's why "Red Brown" (RB) or "Brown" (BN) copper coins are sometimes treated to remove this toning. The resulting color usually has an unnatural and artificial look.

ARTIFICIAL TONING refers to the process whereby patina is imparted to a coin in an accelerated reaction process using chemicals and / or heat. Artificial toning may be removable with proper conservation by NCS but, since it often hides improper cleaning or other surface issues, the coin may yet require Details Grading. 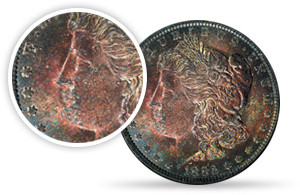 Contact between coins and various surfaces or objects, including other coins, can push metal out of place and leave a permanent disfigurement on the subject coin. This may happen routinely in the normal course of circulation, or it may be the deliberate result of abuse with an instrument of some kind. Read more...

The following terms describe the various forms of mechanical damage to which coins are subject:

BENT coins are simply that — they show a non-mint-made curvature when viewed on end.

CHOPMARKED coins have had Asian characters punched into them as assurances of their value by the merchants who handled them many years ago. This was a common practice with silver coins, particularly trade dollars, circulating in Southeast Asia.

COUNTERMARKED coins have had a figure or character punched into them by some non-official agent, such as a merchant or jeweler. Lacking any official sanction, these punchings are considered just damage.

DAMAGED is a catchall term used when the coin displays any form of destructive contact that may not be defined more precisely. This may be narrowed down a bit by specifying OBV DAMAGE, REV DAMAGE, RIM DAMAGE or EDGE DAMAGE.

GRAFFITI describes a coin into which initials or some other writing has been scratched or carved. This may be narrowed down to read OBV GRAFFITI or REV GRAFFITI.

IMPAIRED is used to describe Proof coins that have received light circulation or mishandling, but whose Proof surfaces remain detectable, even if marred or worn.

MOUNTED refers to some sort of jewelry attachment still present with the coin.

MUTILATED coins display an extreme form of damage, whether intentional or accidental.

SCRATCHES of a very minor nature may permit a coin to be certified, but use of this term in Details Grading indicates that the damage is more severe.

SOLDERED describes a coin that has been used as an item of jewelry and still displays evidence of this traditional bonding agent. Solder cannot be removed with NCS conservation.

WHEEL MARKS occur when a coin-counting machine has left a shallow indentation on the coin, resulting in a highly polished spot. This may be narrowed down to specify OBV WHEELMARK or REV WHEELMARK. 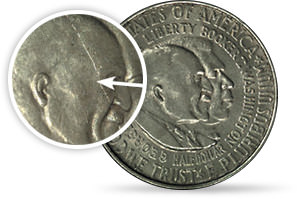 A coin improperly restored through mechanical means is described as having some form of repair. Many older coins, particularly Bust type silver dollars and gold dollars, were worn as jewelry generations ago. This often caused them to be holed for suspension on a chain or soldered to mountings. Other coins simply became damaged through the normal mishaps of general circulation. Years later, having achieved numismatic value, these coins were repaired through various means. Though this work is often skillfully performed, most experts will spot the repair, and such coins cannot be graded numerically. Read more...

CHOPMARK REPAIR reveals that a chopmark (see MECHANICAL DAMAGE) has been fully or partially effaced through tooling or filling.

MOUNT REMOVED indicates that the coin was formerly mounted to a ring or bezel and that this attachment has left evidence of its one-time presence. Most modern bezels are designed to secure a coin without doing any harm, but some older ones resulted in a crimping effect, or were soldered to the coin’s rim.

PLUGGED coins are ones that were previously holed, typically for suspension as jewelry, and have had their holes filled in to conceal the damage. As the affected area usually includes design features, these will show evidence of re-engraving.

RE-ENGRAVED describes a coin that has had worn or damaged details replaced through the use of engraving or chasing. This may be narrowed down by stating OBV RE-ENGRAVED or REV RE-ENGRAVED. A related repair is ETCHED STARS, these peripheral features being among the first to wear down on older coins.

REMOVED FROM JEWELRY is more or less self-explanatory but is used when the more specific damage descriptors are not enough to fully describe the effect.

RIM FILING is done to coins to remove irregular metal or to even out their rims. It may be used to obscure normal circulation damage or signs of jewelry use. OBV RIM FILED and REV RIM FILED are used to identify the specific area affected.

RIM REPAIR describes work performed to obscure either naturally occurring or intentionally inflicted damage. A common cause of such damage was the attachment of coins to pins or rings, as well as encasement of a coin within a bezel or "lucky coin" frame.

SMOOTHING is akin to TOOLED (see below), but it is used when the exact means of achieving the described effect is unknown.

TOOLED refers to either the smoothing of a coin's fields to remove scratches, corrosion and other forms of damage or to the restoration of lost details through use of a graver or knife. When a single side of the coin is affected, the terms OBV TOOLED and REV TOOLED are used. 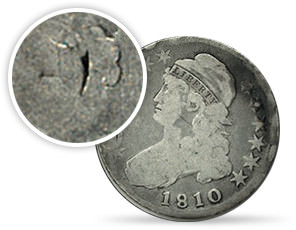 Coins are sometimes flawed as made. NGC, as a general rule, will not assign numeric grades to coins having minor flaws such as rim clips or laminations. Major mint errors such as off-centered coins and wrong planchets are graded under NGC's regular tiers as "Mint Error" coins. Read more...

CLIPPED PLANCHET refers to a portion missing from the edge of a coin's planchet. A large missing area is gradeable as a Mint Error, while very small clips will result in Details Grading only. 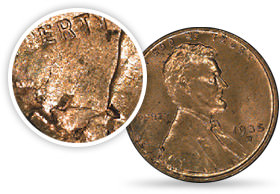 Coins with active surface residues and a handful of other conditions cannot be graded by NGC until they have been professionally conserved. Numismatic Conservation Services (NCS), an independent affiliate of NGC, can carefully conserve coins and then seamlessly transfer them to NGC for grading. Learn more about NCS > 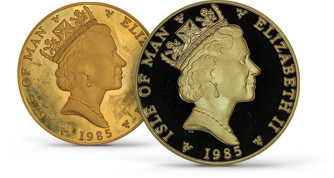 NGC Details-graded coins each receive an NGC Details grade according to the amount of detail that remains on the coin. Coins lose detail as a result of wear, which is metal loss that occurs during circulation. For that reason, NGC Details grades are sometimes referred to as "wear grades."

The NGC Registry is not endorsed by or associated with PCGS or CAC. PCGS is a registered trademark of Collectors Universe, Inc. CAC is a trademark of Certified Acceptance Corporation.
NGC is the Official Grading Service of
NGC is an Approved Grading Company of
Help

See NGC Registry Instructions/FAQs or send us a message below